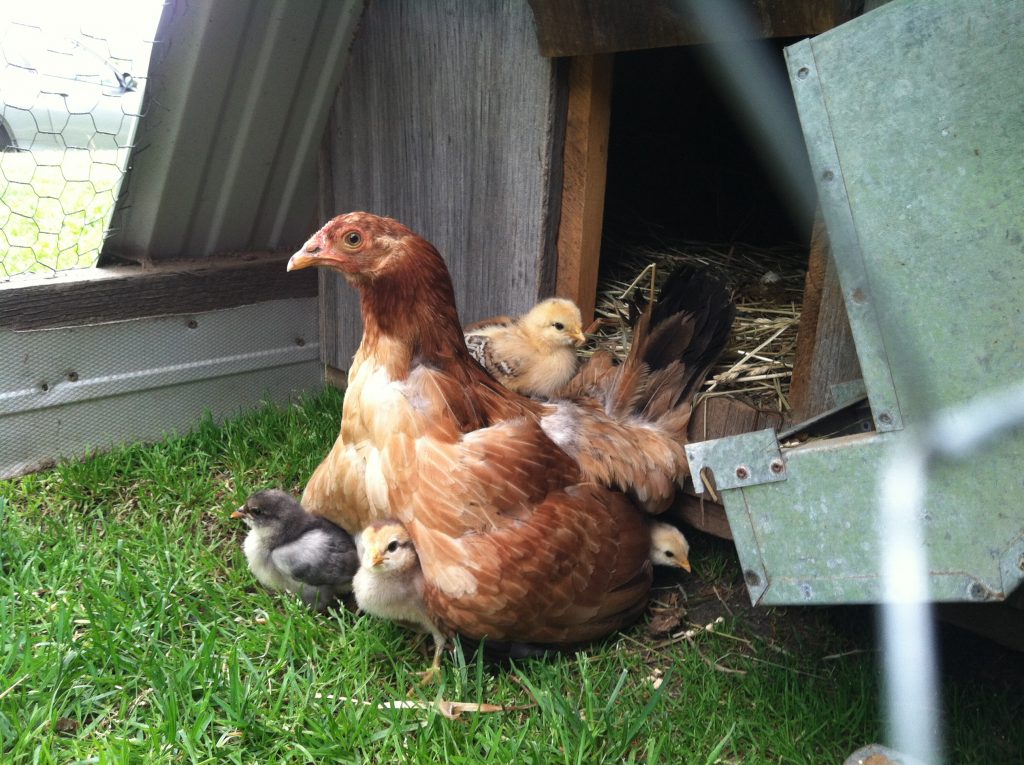 During the spring and summer months you may see a mother hen with chicks in the backyard. Most of Sorrel’s chickens are bred and hatched naturally here on the farm by mother hens. Sorrel is developing a new breed of blue egg layers: fast, smart, fierce, thrifty, productive, and wild. They range freely all day, every day. They consume fresh forage, farm grown wheat, whey from our cheesemaking, kitchen scraps, and a conventional layer ration. 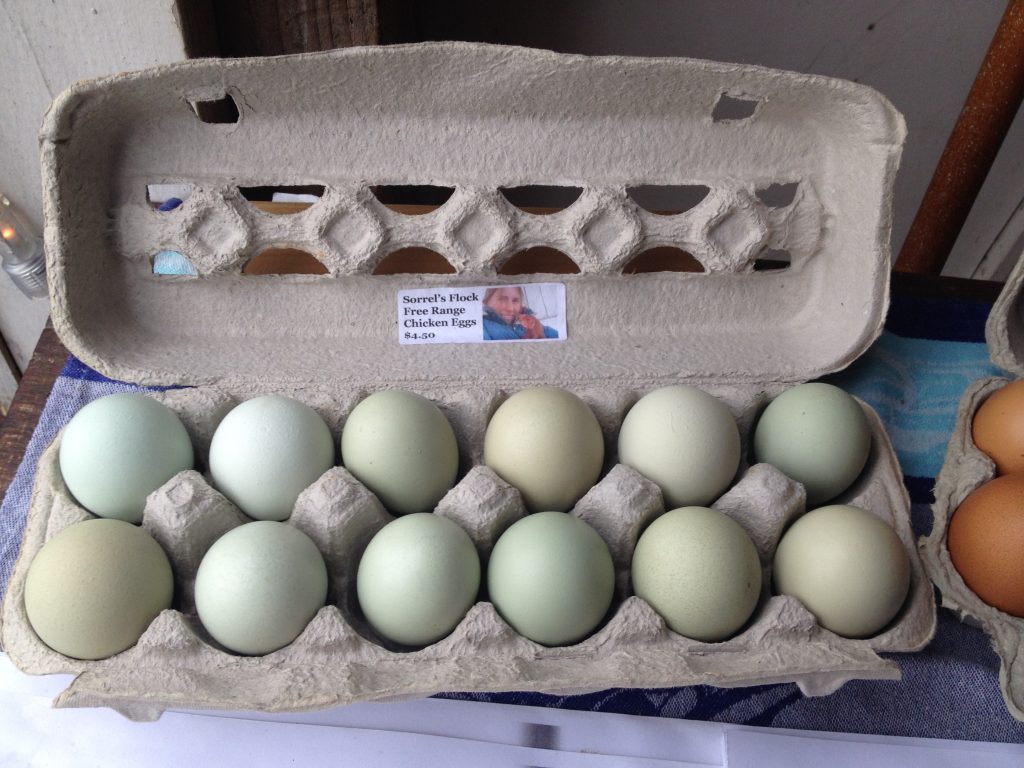 We also sell eggs from other local farms. Diemand Farm in Wendell supplies the store with fresh eggs as well as fresh chicken and frozen chicken, soups, potpies, and pulled turkey. We also sell free range eggs from Mondego Acres in Northfield, Chase Hill Farm in Warwick, Wingate Farm in Winchester, and many other small family flocks. 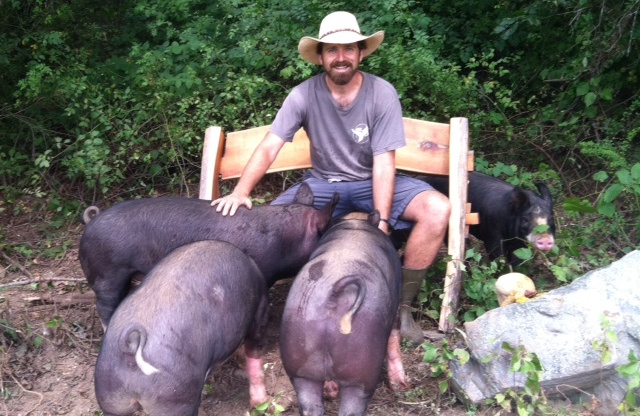 Every season Isaac raises a small batch of 8-10 pigs, clearing underbrush on the edges of Upinngil’s pastures. He generally raises Berkshire’s, prized for the quality of their generously marbled pork chops. They thrive all summer on whey from our cheese making. They are also fed on local non-GMO grain from Clover Luck Farm in Hardwick, and moved regularly for fresh forage. 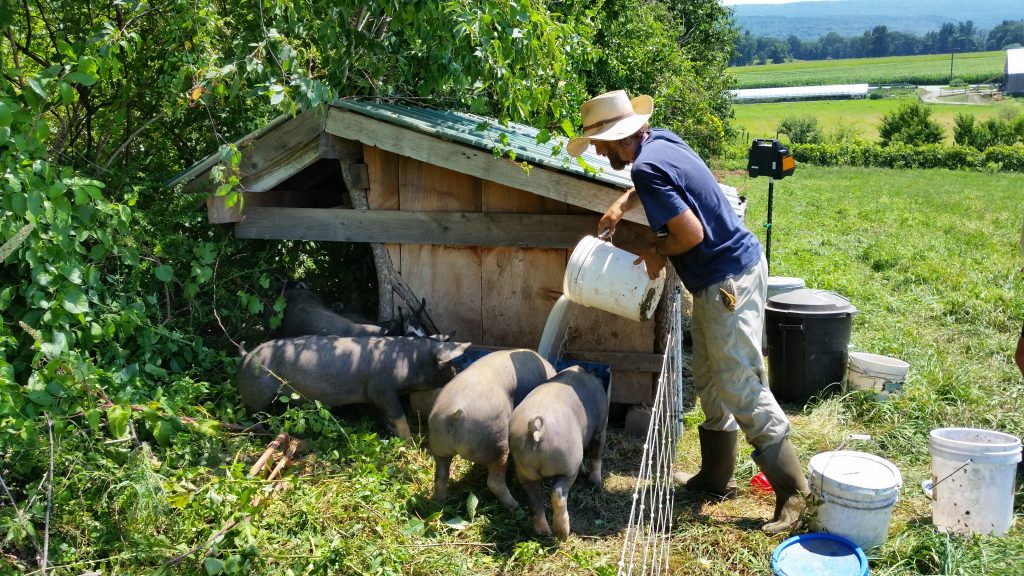 The season’s pork becomes available for sale in our farm store by December as frozen pork chops, ribs, bacon, ground, sausage, hot dogs, liverwurst, and backfat. We usually sell out in about 6 months. To fill the gap we also buy pastured pork from Bascom Hollow Farm in Gill and OMG Farm in Amherst. 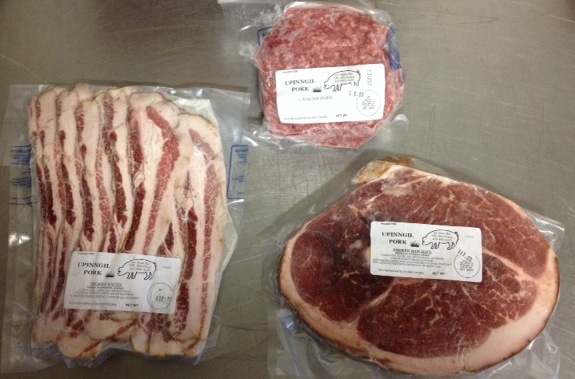 One of the hardest things about dairy farming is saying goodbye to our old cows. But the time eventually comes for all of them, even the best, to say goodbye. Our cows often live to be as old as 9 or 10 before they no longer breed back or become unproductive for other reasons. This is a lot better than the average lifespan of a conventional dairy cow in the USA which is 3.5 years. We send them to Adam’s Farm Slaughterhouse in Athol. Their state of the art facility is designed by Temple Grandin to minimize fear and stress for the animals prior to slaughter.

We sell the meat in our farm store mostly as ground beef, though sometimes we may have nice steaks if we decide to beef a younger animal. The cows are rotationally grazed on Upinngil pastures and fed Upinngil hay in winter. If they are being milked they also receive Non-GMO grain from Green Mountain Feeds at milking time.

Upinngil’s herdswoman Sarah raises veal on her own farm here in Gill. Sometimes they are bull calves from Upinngil cows.  She sells her veal to local restaurants and at Upinngil’s farm store.  The calves are humanely raised with ample space and fed on fresh milk. The meat is called “rose veal” because it is from an animal more than 3 months old that is eating grass, so the meat has more color than younger conventional veal fed strictly on milk. Male calves of dairy breeds are best suited to veal because they do not gain weight like beef breeds so are generally unprofitable to raise to full size. A cow must calve every 1-2 years to make milk – and so veal calves are part of the cycle of life on a dairy farm.

Pizzas are hot! Come get them now, and every Thurs

Theme by Anders Noren — Up ↑

Get Directions to Upinngil: